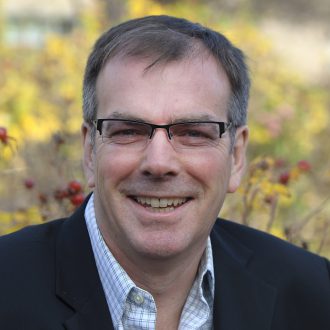 Dr. Bell (PhD Alberta 1992) is a University Research Professor in Geography at Memorial University of Newfoundland.

For over three decades, he has studied northern landscape history from a variety of perspectives, including climate change impacts and human-environment interactions. His research approach is strongly interdisciplinary and collaborative, involving analysis and expertise from a range of disciplines in the earth, life, and social sciences. Dr. Bell has played an important role in the ArcticNet NCE, both as project leader and coordinator of the Eastern Arctic integrated regional impact study. He recently co-authored the North Coast chapter in the 2016 Government of Canada publication on Canada’s Marine Coasts in a Changing Climate, and is a founding member and co-lead of CACCON, the Circum-Arctic Coastal Communities Knowledge Network. Dr. Bell has also led the development of the SmartICE initiative that supports safer travel for sea-ice users in northern coastal regions under changing climate. SmartICE was a recipient of the 2016 Arctic Inspiration Prize for its knowledge-to-action plan to expand across the arctic through a northern social enterprise.